Africa’s largest film festival has awarded a Kenyan actress for her depiction of a lesbian character in a film that is banned in her own country.

Homosexuality is illegal in Kenya – a legacy of British colonial-era rule.

Gay sex is punishable by 14 years in Kenya but the country’s High Court is due to rule on whether to strike down the ban in May.

KFCB had previously warned that anyone found in possession of the film would be in breach of the law.

Rafiki, which means “friend” in Swahili, traces a coming-of-age love story between two young women who meet and fall in love.

Their romance unfolds against a backdrop of homophobia and despite their families being on opposing sides of the political divide.

The film is based on Jambula Tree, a prize-winning short story by Ugandan writer Monica Arac de Nyeko. 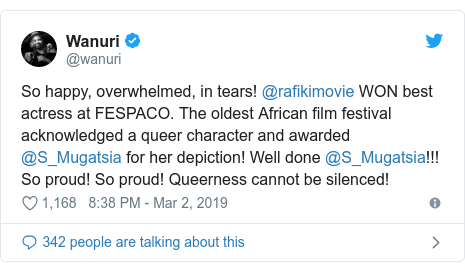 The best actor award went to Marc Zinga for his part in The Mercy of the Jungle, in which he plays a soldier lost in the jungle in wartime Democratic Republic of Congo.

The director of that film, Rwandan Joel Karekezi, won the top prize of the film festival, known as the golden stallion of Yennenga.

Fespaco, the acronym in French of the Pan-African Film and Television Festival of Ouagadougou, is celebrating its 50th anniversary this year.